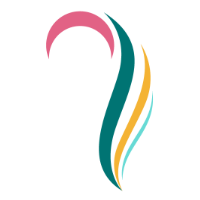 VSPERF participated in OPNFV Plugfest for Danube release at Orange Gardens, Paris from 24th April 2017 to 28th April 2017.  As part of the plugfest VSPERF had following activities planned:

This page describes the (1) activity – Test execution – which can be categorized as follows:

(a)    NFVI Benchmarking - VPP vs OVS-dpdk:  OVS vs VPP – Comparing the two virtual switches – in terms of both performance and resource-consumption 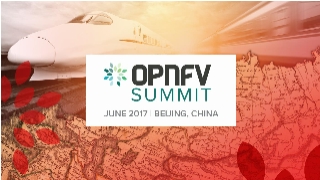 Intel POD 12 was dedicated for the event, which had 6 servers with normal Pharos configuration. The important nodes of the configuration are

ii.      BM-A-trafficgen: Use interfaces eno3 and eno4 through DPDK

iii.      TGen-VM with Passthrough: Uses the itnerfaces eno3 and eno4 via passthrough and DPDK. 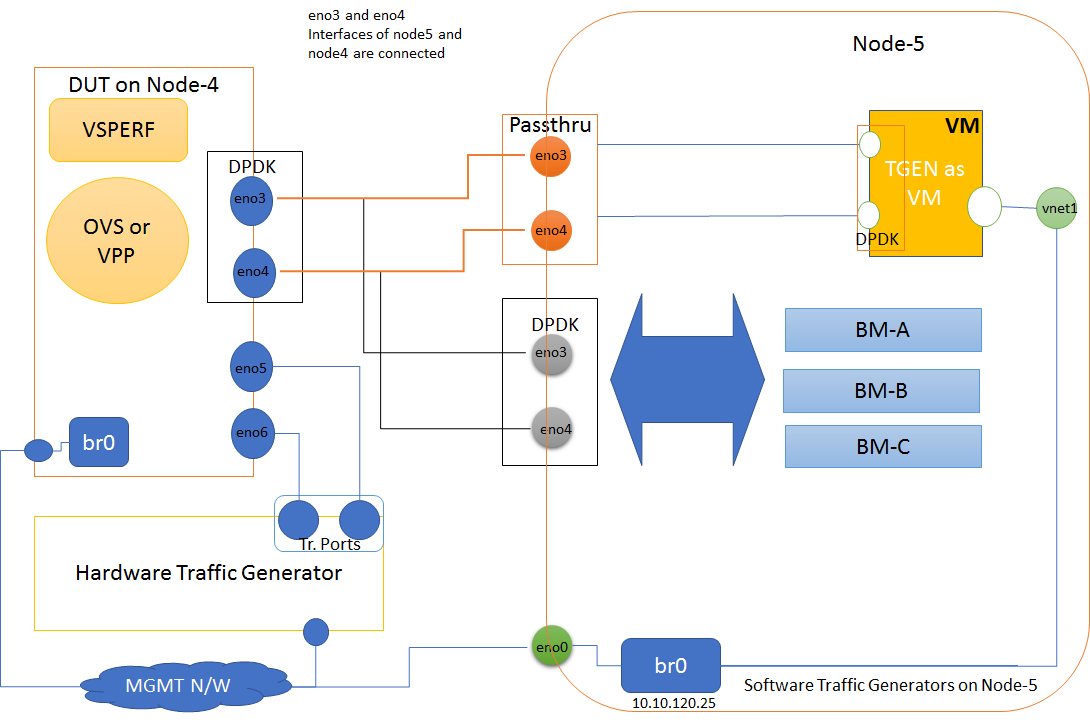 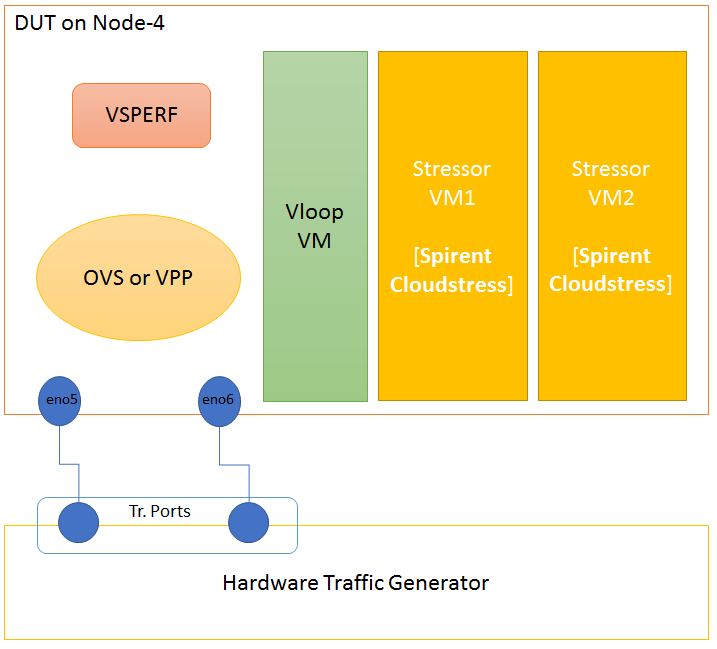 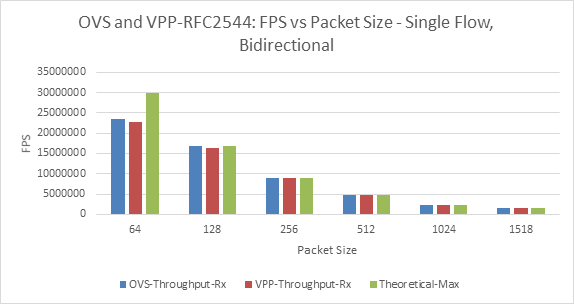 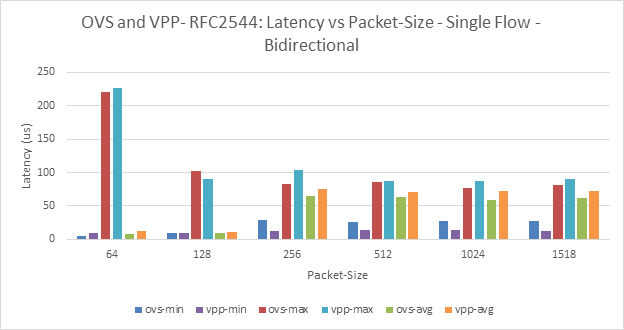 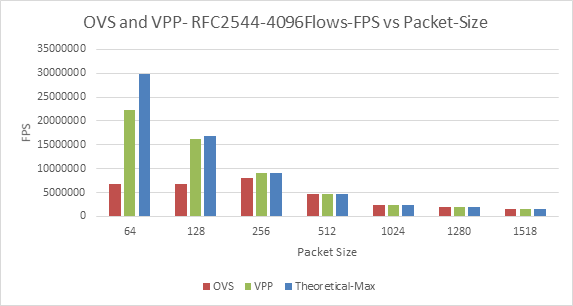 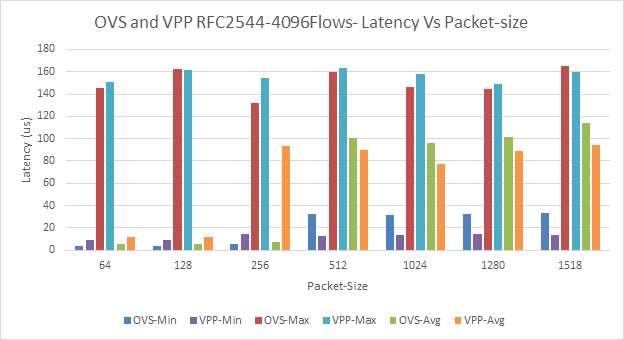 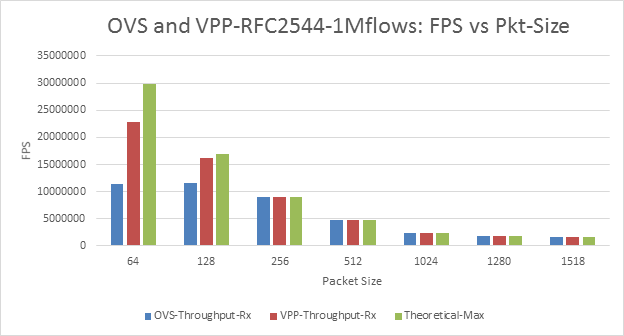 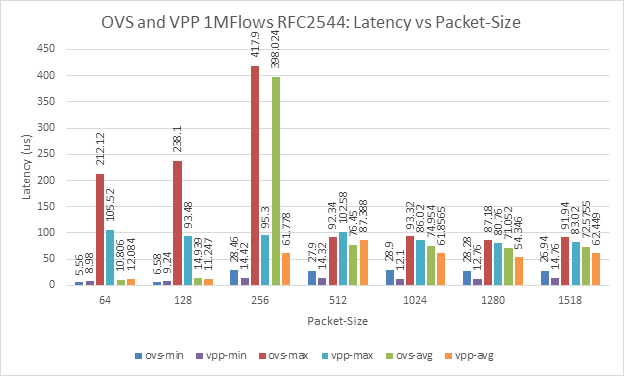 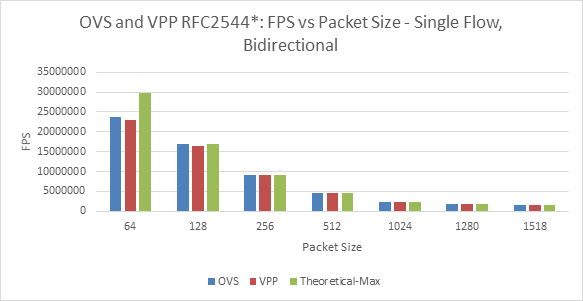 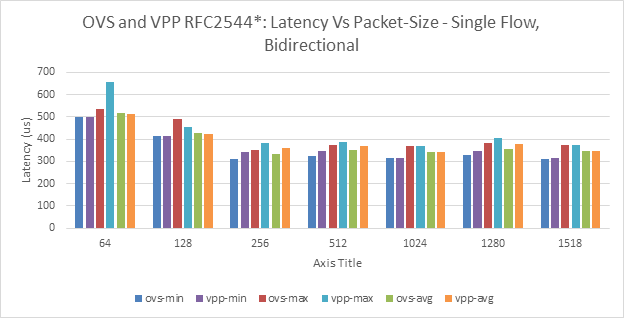 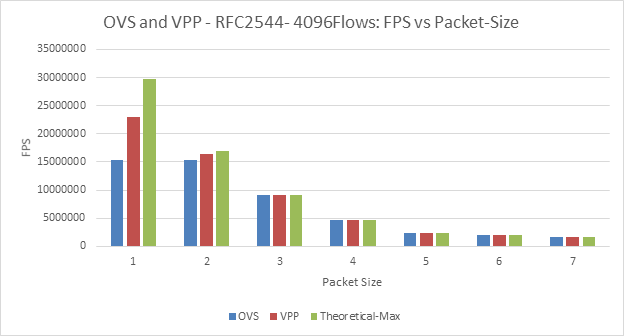 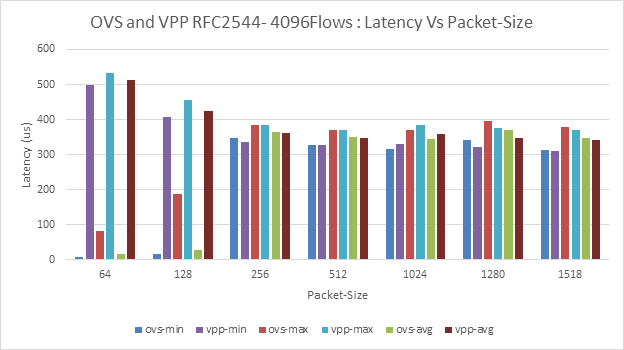 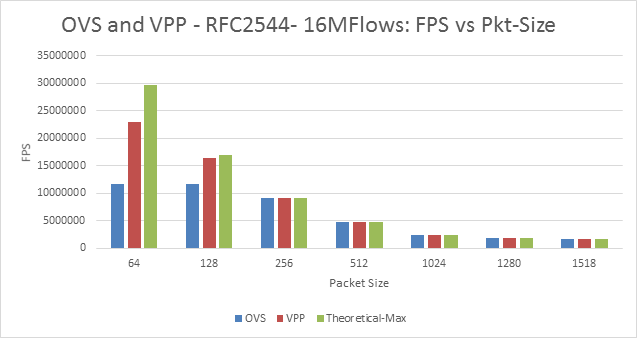 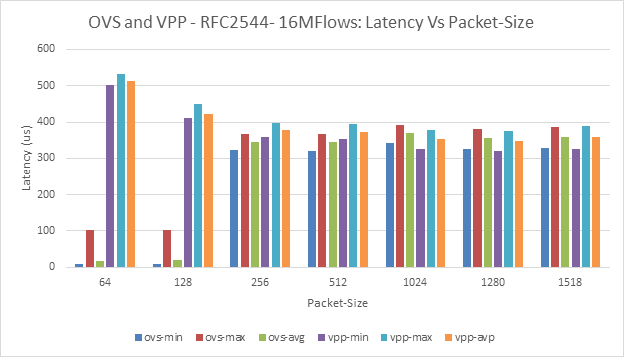 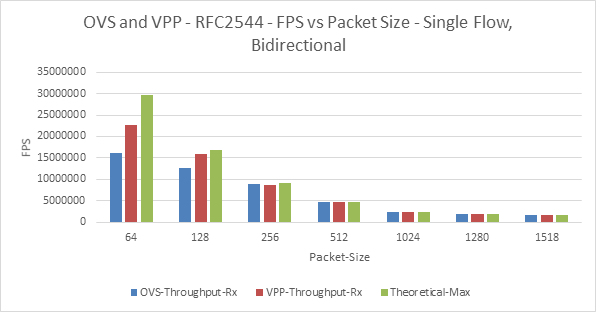 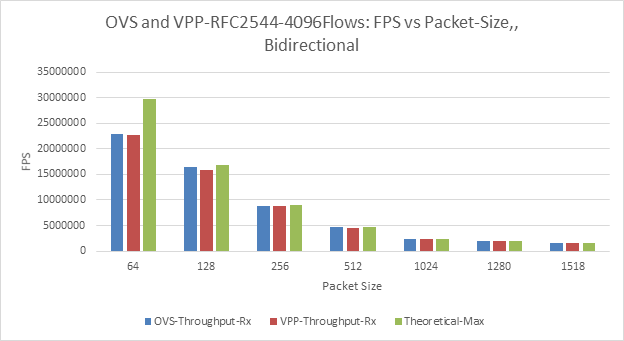 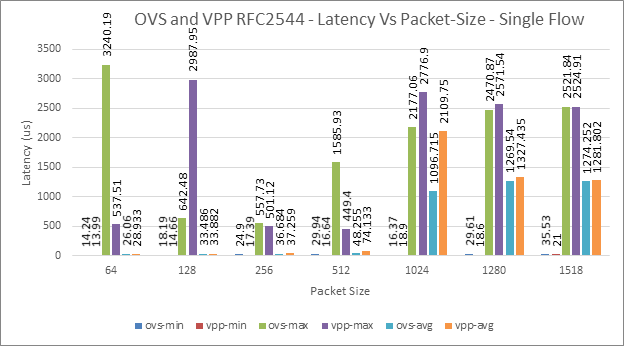 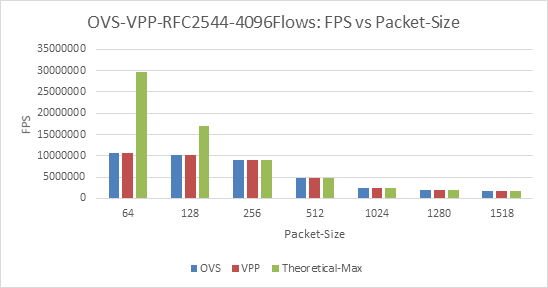 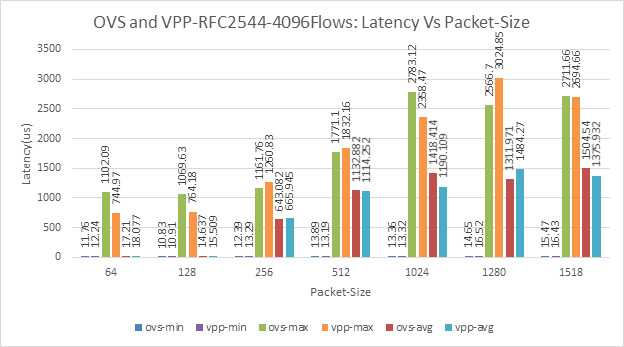 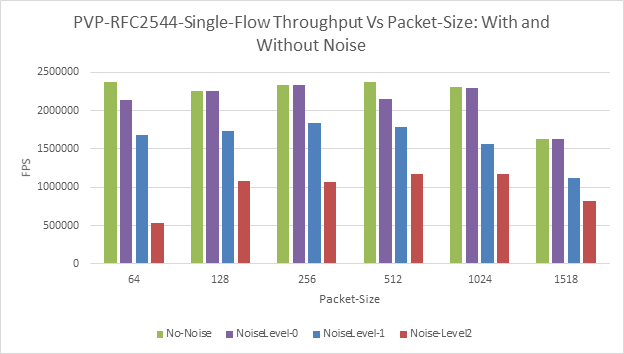 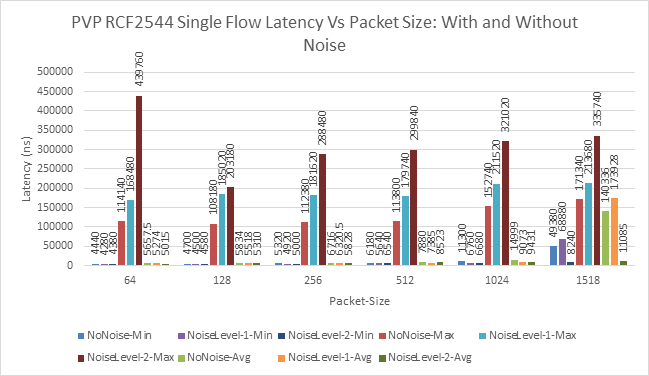 Figure 22: PVP, RFC2544 Single Flow, Latency Vs Packet Size: With and Without Noise

VSPERF team plans to complete the following tests before next Plugfest.

RFC2544 Back-to-Back tests attempt to determine the maximum length of a stream of frames (sent with minimal spacing, or back-to-back) that can be transmitted through the DUT without loss. 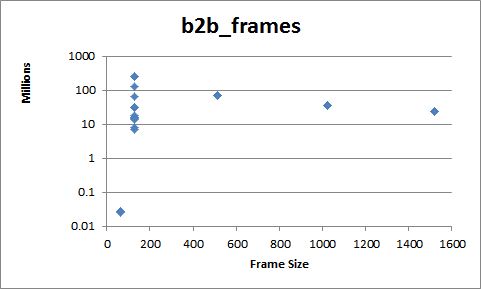 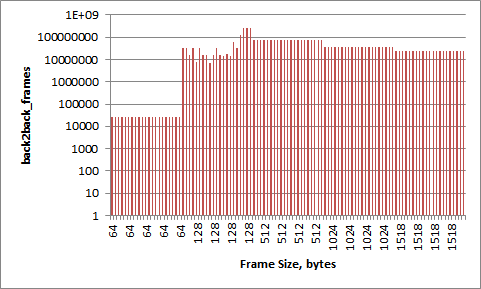 Figure B-1: OVS RFC 2544 Back-to-Back CI Testing of P2P Deployment on POD12 in 2017 (individual measurement time series on the right)

The Purpose of back to back testing is to assess the amount of data buffering in a networking device or function.There are (at least) 3 properties of the test set-up which influence the results:

A simple model of the test setup includes the following functions in sequence:

If the Max Header Processing Rate of the DUT is less than the rate of Frame Generation, then buffering will occur, and potentially frame loss.

The VSPERF Back2Back test uses five different frame sizes, and each frame size has a Maximum Frame Rate that depends on the minimum Inter-Frame Gap (12 bytes), the Ethernet Preamble (8 bytes), and the nominal interface bit rate (10 Gigabits/second on eno5 and eno6 of Node 4).

From Table B-1, it is clear that only the 64 byte frame size has a Max Frame Rate sufficient to reliably cause Buffering and Loss.  For larger Frame Sizes, the average Throughput measured is sufficient to handle the Max Frame Rate (Note: Measured Throughput averages include some sub-par measurements, and the Averages are slightly lower than the Max.) Observe that the large number of Back2Back Frames reported represent 30 seconds of buffer time (impossible) and are more likely an artifact of the test duration specified at the Frame Generator. Figure B-2 Illustrates the estimated Buffer Times, and consistency across the 20 CI test results for each frame size can be evaluated. 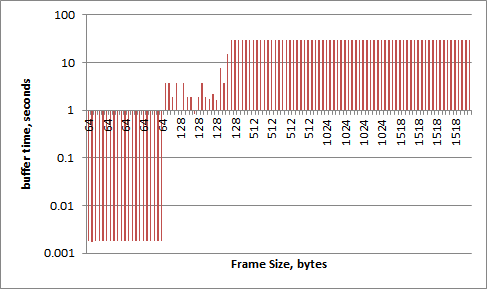 A Source of Error for the only useful estimate of Buffer Time (64 byte) can be traced to the number of frames removed from the Buffer (by Frame Processing) before a frame loss occurs due to overflow. As Frames arrive at Max Frame Rate, a portion of frames are removed from the Buffer according to the ratio between the Measured Throughput and the Max Frame Rate. The remaining Frames represent the Buffer Time corrected for Frame processing. We calculate that only 5,713 Frames remain in the Buffer, corresponding to 0.000384 seconds. It is important to distinguish this source of error and estimate the actual Buffer size, especially for scenarios where the measured Throughput will not be achieved, or when Frame processing is suspended temporarily.

For a different view of Back2Back measurement consistency, we look at 22 measurements conducted in CI for POD 3 in Figure B-3. 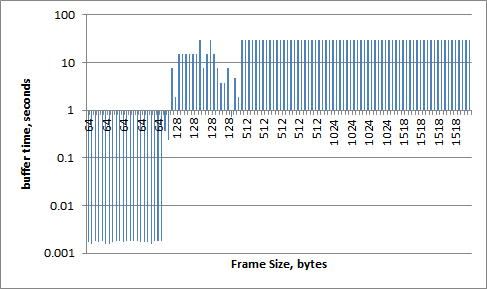 POD 3 uses different hardware for the DUT. We can see that the estimated Buffer Times for 64 byte Frames are slightly more variable, with an average of 25796 Frames or 0.001733 seconds (uncorrected for Frame Processing). Again, tests using 128 byte Frames show that the DUT is on the cusp of achieving Max Frame Rate, and yield impossible buffer size estimates.

When we change the deployment scenario in the DUT to PVP, the measured Throughput is greatly reduced and more than one Frame size may produce a useful estimate. 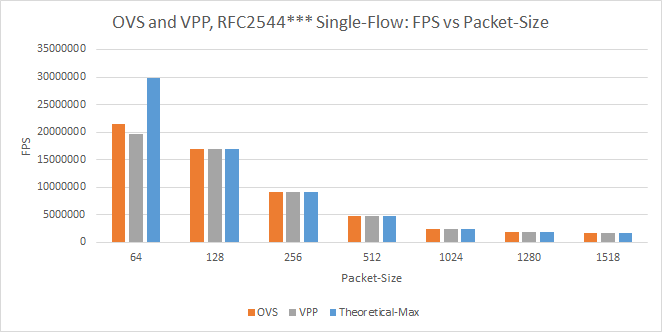 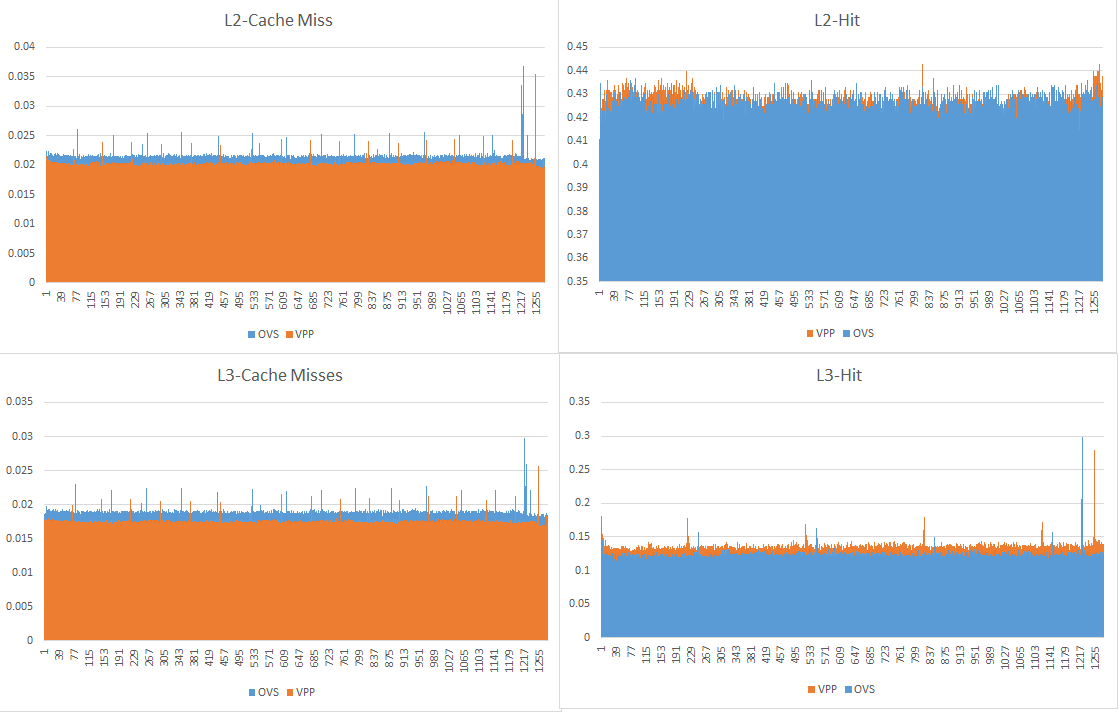 Figure 26:  Cache hits and misses for OVS and VPP

Note: The TGen configurations for multistream were different, and this may explain some of the performance variation observed.